First off, let us tell you that getting tickets to the Ghibli museum is hard, so when we snagged some for our visit in April 2017, we were over-the-moon excited! We have wanted to visit the Ghibli Museum in Japan since our first trip to Tokyo in 2014 and as we arrived at the front gate of the museum the wave of happiness washed over us. It was a long time coming and now we have arrived. 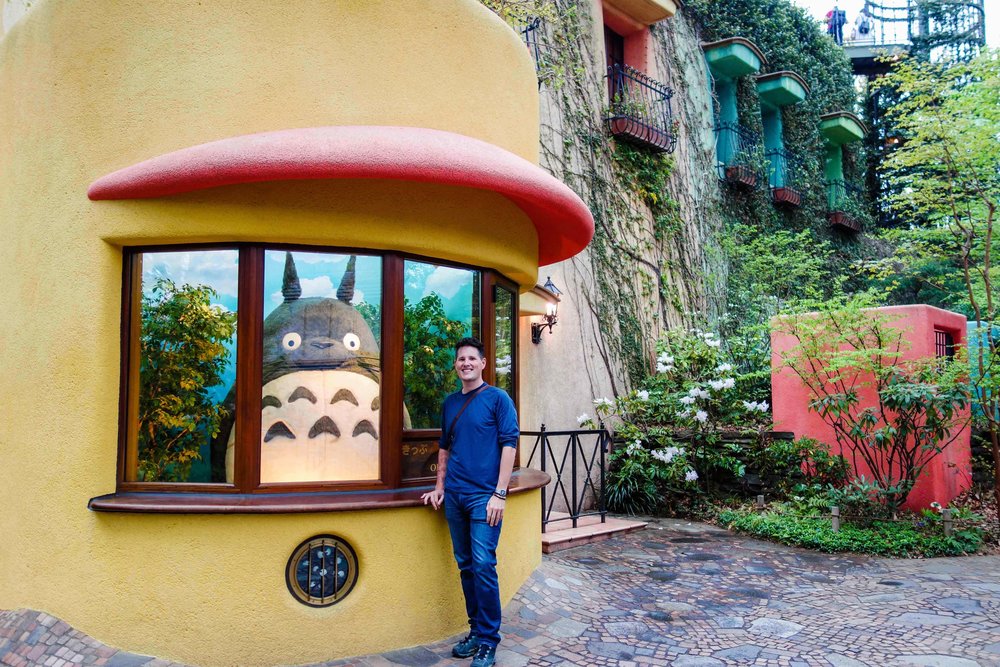 Let’s bring it back to the question of “how” to get a ticket for the Ghibli Museum. Tickets are by reservation only and must be purchased ahead of time. No tickets are sold at the museum in person. There are three main ways to get tickets ahead of time.

1. Lawson’s official online ticket store (english version) – At 10am, Japan time, on the 10th of the month, tickets for the the following month go on sale (i.e. on March 10th, tickets go on sale for April 1st – April 30th). These tickets are limited in number and sell out very quickly. We made sure we were up and online to secure our tickets. There was a lot of frustration as the website could not handle the volume of people who were trying to attain tickets. However, after 20 stressful minutes, we finally secured our tickets. COST: 1,000 JPY each ($9 USD)

2. Sales by the JTB sales offices located overseas – A limited number of tickets go on sale through these locations at the first of every month for the following 4 months. (i.e. on January 1st, tickets go on sale for the entire months of January, February, March, and April). We never had luck with this because the tickets were always sold out due to the limited number available through JTB.

3. When in Japan only, you can buy them at the Lawson convenient stores through a machine. We tried this back in 2014 and it was funny trying to figure it out. When we did figure it out, we realized they were sold out. Our advise is to buy them WAY ahead of time using method 1 or 2.

There is one strict rule you MUST know before entering the museum. The person who purchased the tickets is required to be present with a print out of the ticket and a passport proving your identity. It MUST be a passport, because they match up your passport number with the number you provided to them when purchasing the tickets. 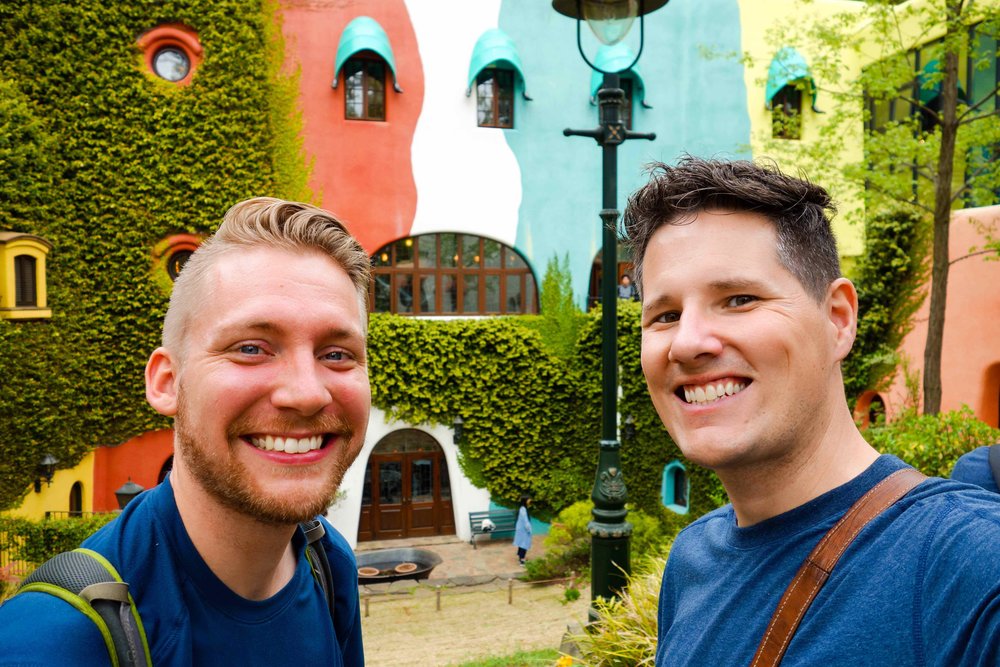 With our passports in hand and our print outs checked, we could start entering the museum. As we entered, we were greeted by the nicest people at the front counter. They gave us our official tickets, which were cuts of film strips from a Studio Ghibli film, and reminded us that no photos were allowed once inside the museum, however photos could be taken in outside areas. The reason no photos are allowed inside is because they believe that the museum should be about transporting you into the magical world of Ghibli without distractions to yourself and to others.

Following the rules, we packed up our cameras after a quick photos of our tickets and transported ourselves into the wonderful world of Ghibli. Good thing there was no time limit to our visit, because we would spend the next few hours taking our time to immerse ourselves in the experience.

Stepping into the main atrium was magical. Everywhere you looked was made to put a smile on everyone’s face. From the stained-glass windows, donning characters from various Ghibli movies, to the bridge spanning across the second floor, the attention to detail was spectacular.

The first room on our tour was all about motion in films. The highlight in the room for us both was the live stop motion display where clay figured were posed on a wheel that spun very quickly while strobe lights flashed at a fast pace giving the figured that appearance of movement. Everything has already exceeded our wildest expectations.Stepping into the main atrium was magical. Everywhere you looked was made to put a smile on everyone’s face. From the stained-glass windows, donning characters from various Ghibli movies, to the bridge spanning across the second floor, the attention to detail was spectacular.

Included in the Ghibli museum ticket is admission to the museums animated short film. These shorts have been produced for and shown only at the museum. These films are rotated between throughout the year so there is always a good reason to come back and watch more. We were lucky enough to see “Water Spider Monmon.” We were oohing and aweing just like the all of the other kids and adults.

After the movie, we decided to head up to the rooftop to get whatever sunshine was left for the day since the rain was supposed to roll in soon. The way to the roof is via the third floor up an outdoor spiral staircase. The rooftop is one of the few places where photography is allowed and good thing because who wouldn’t want to take a photo with the Robot from “Castle in the Sky”. 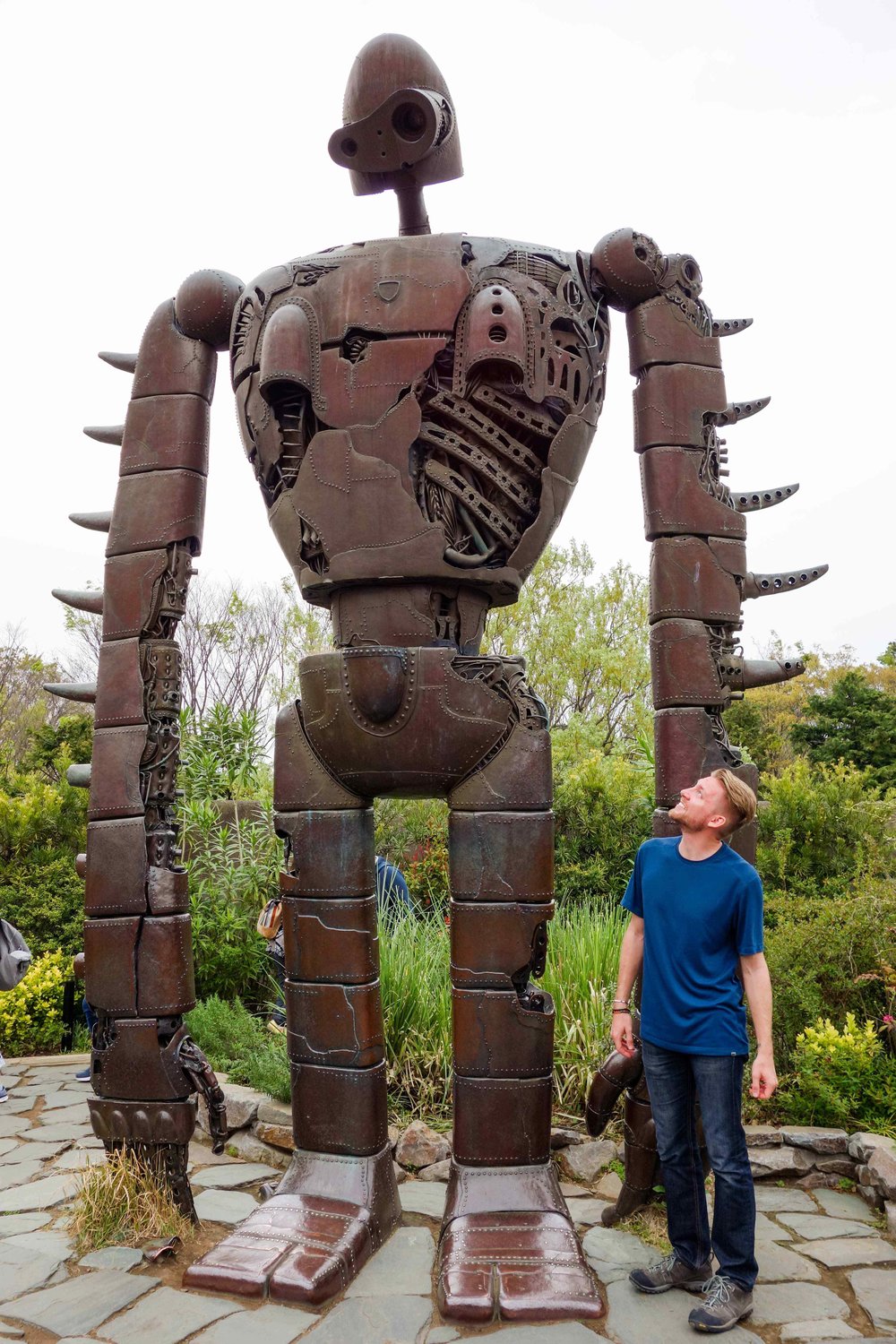 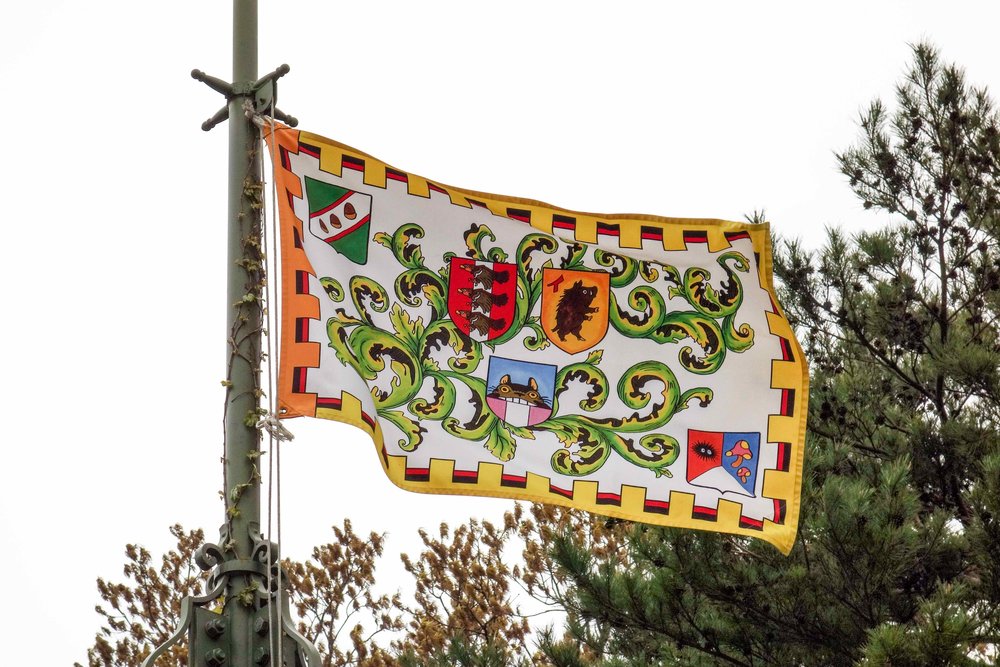 After our fun on the roof we headed back to the second floor to continue looking through more of the most amazing permanent and special exhibitions. The special exhibition when we were there was “All Aboard! The Cat Bus to the Ghibli Forest.” It was incredible. We entered into the room and realized we were inside of the famous Cat Bus from “My Neighbor Totoro”. Other amazing features in the room was an eight-foot tall model of the mechanical castle from “Hal’s Movie Castle.” You could even peek right in the windows a see Calcifer burning in the chimney.

From the second floor we made our way out to the Straw Hat Cafe for a snack. As with any museum, the prices were slightly higher than eating at a cafe elsewhere, but we couldn’t say no to a chance to get the full Ghibli experience. The “Porco Rosso” sign outside let us know the menu for the day, good thing there was an english menu inside. We each ordered a coffee and a shared a piece of cake. The late had a super adorable hat sprinkled on it in cocoa and the cake was topped with a Totoro flag, sheer perfection! 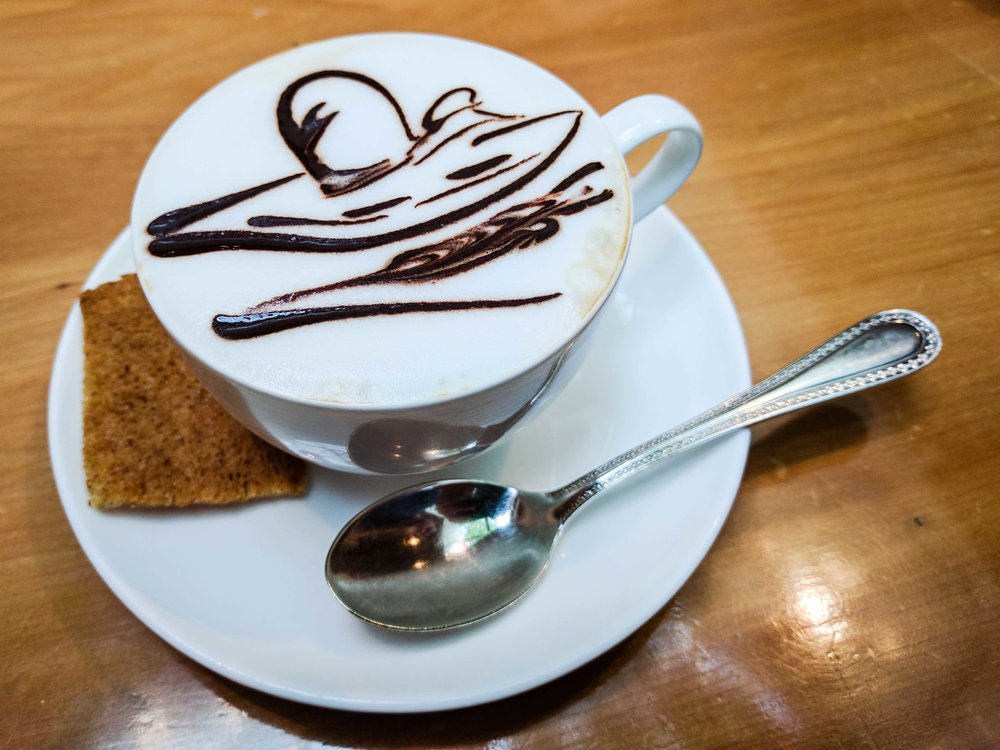 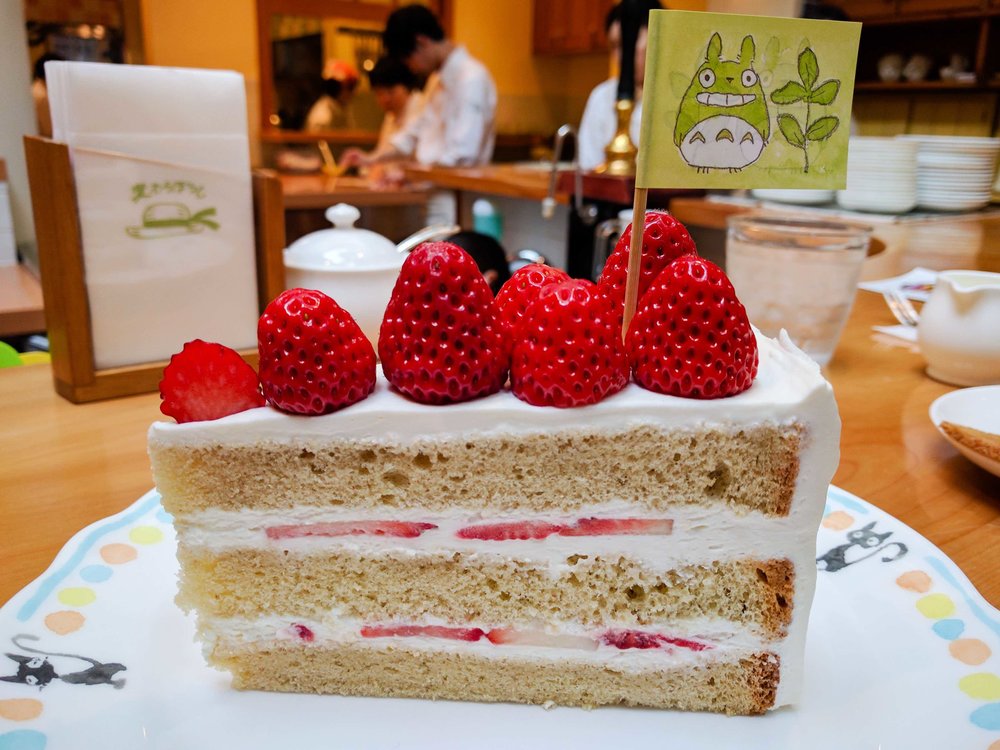 Our final room in the museum was Miyazaki Hayao’s studio, he is the director of the Studio Ghibli films. Every surface of these few rooms were filled to the brim with sketches, painted layers of favorite characters, fully realized designs, and much, much more. We were kids in a candy store. Our appreciation for the magic that is created by Studio Ghibli has grown so much. It is absolutely amazing how kids and adults can be transported into wonderful stories that teach us about ourselves and the world around.

Before leaving the museum, we made our way up to the gift shop on the third floor to look around. We ended up buying a few little things we had not seen for sale anywhere else to commemorate our journey into the magical world of Studio Ghibli. This is an experience we will cherish forever.

We are two en route for more magical moments.